The bright umbrella of peace 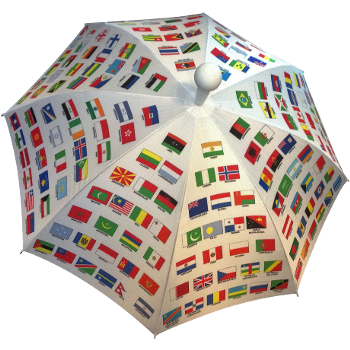 This umbrella, named "Bright Umbrella of Peace", was founded in September 2001 by the idea of Paolo Usai, who saw on TV the two Presidentes of USA and Russia under an umbrella, interviewed by a reporter after the terrible attack to the Twin Towers in New York. The author thought to this original invention as a "Symbol of peace among peoples": this is why the umbrella coverage reproduces all the flags of the states of the world printed in the same measure and on the top it has an enlightened ball with the word "Peace", lighted by a cold led, which is fed by a battery placed in the handle of the article. This invention was submitted to the Ministry of Industry in Rome on march 2002; the umbrella coverage must have a led for each flag. Each exemple of the "Bright Umbrella of Peace" has a number of catalogue: the nr. 1 will be given to Pope Francis I, the nr. 2 will be in possession of the author and the nr. 3 will be repeated for 197 times, for each State represented by the flag and will be delivered to each respective President. From nr. 4 it will be the possibility of purchase by everyone who wants. All the owners of that umbrella, from nr. 1 to infinity, will be recorded in a register.
• No contrary direction to rain
• Guaranteed 50 hours of light